You are here: Home / News / U.S. Marathon Champ offers advice for Iowans who want to take up running (AUDIO) 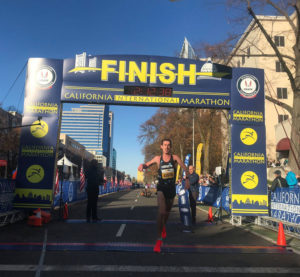 Many Iowans are making resolutions to exercise more in 2019 and an Iowan who recently won the U.S.A. Marathon Championship has some advice for those who plan to make running part of their health improvement plans.

Brogan Austin says it’s important to “keep it fun” and be patient. “I know a lot of people feel like they need to run fast or just get right after it right away, but I think the biggest thing is making sure you enjoy the process,” Austin said. “It’s okay to run slow and just gradually build up your miles. The more you do it, the easier it becomes.”

Austin, a Boone native who now lives in West Des Moines, won the national marathon championship in Sacramento, California on December 2. He finished the 26.2-mile race in 2 hours, 12 minutes 38 seconds.

The 27-year-old Austin suggests Iowans who want to take up long distance running set an initial, reasonable goal. For instance, getting above the three-mile mark. “Because that’s when you can really start to zone out, daydream, or as the running community calls it – the runner’s high,” Austin said. “Running is such a great exercise activity and it releases a lot of stress. I think people put too much of an emphasis on making it a workout, but it can be an enjoyable thing too.”

Austin has a new goal for himself – to make the U.S. Olympic team in 2020. “I think that’s a lot more feasible now. I think I have a good shot at that,” Austin said. “In the build-up to that, I’d like to get back on the track this spring – try to run some fast 5K to 10Ks. I’ll probably run another marathon at some point, maybe in October. You know, all with the big picture in mind that I want to try and qualify for the 2020 Olympics in the marathon.”

Up until a month ago, the Drake University graduate’s biggest accomplishments included qualifying for the 2014 NCAA Cross Country Championships and winning the Drake Relays 5-K in 2013. Austin described his win at the U.S.A. Marathon Championship as “a whole other level of euphoria.”

In order to make the U.S. Olympic marathon team, Austin would need to finish in the top 3 in the Olympic Trials race scheduled for February 29, 2020 in Atlanta.

Austin told Radio Iowa he felt like he had the potential to win the race in California, but was somewhat shocked with his performance over the last three miles – when he overtook the runners who were in third and second – and then closed on the leader.

Austin believes the secret to his strength at the end of race stems from his unique training program.