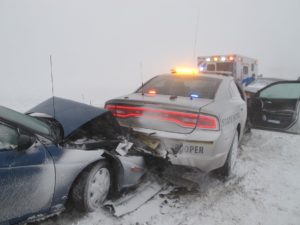 Fewer people were killed in traffic crashes in Iowa last year, but Iowa State Patrol Sergeant Nathan Ludwig says it’s not necessarily because people are being more careful when they get behind the wheel.

“So, just the State Patrol…we covered almost 500 more crashes (in 2018) compared to a year ago,” Ludwig said. Traffic accidents have increased in Iowa in recent years, while fatalities have dropped. Ludwig credits several factors. “The biggest reason is cars are safer. We saw an all-time high with seat-belt compliance (in 2018) at 93.8-percent,” Ludwig said. “The other biggest reason is that response time and medical care is probably at an all-time high. Every vehicle has a cell phone in it so when an accident occurs, dispatch is notified immediately, and response time is pretty quick.”

Statistics from the Iowa Department of Transportation show 318 people were killed in traffic accidents in 2018, down from 330 the previous year. Iowa nearly improved on a low fatality count posted five years ago. In 2013, there were 317 traffic deaths – the fewest since 1944 when there were 310. According to Ludwig, troopers are catching more motorists on interstates who are clocked in the triple digits – traveling at speeds of 100 miles-per-hour or more.

“We’ve seen a lot of accidents involving extreme speed,” Ludwig said. “Probably the most obvious thing is accidents occur because people are so distracted – not just from phones but doing other things inside of their vehicle beside just driving.”