You are here: Home / News / Artificial snow machines have been busy as snowblower repair shops are idle 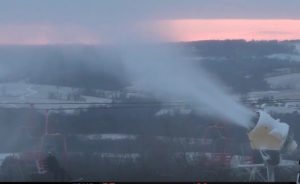 The months of November and December have passed, and many Iowans have not even touched a shovel or snow blower. Businesses that rely on snow are missing out on some money-making due to the mild winter.

Corey Koppes, who owns a small engine repair shop in Dubuque, spoke with KCRG-TV. “Well it’s been slow, we expect a lot more snow than this,” Koppes said. His shop is usually filled with snowblowers at this point in the season. Koppes is hoping things “even out” over of the next few months.

“Pretty much every year it’s about the same,” Koppes said. “We may not get snow now, but you know these next couple months we could just get hammered with snow and it will make up for the average – you never know.”

Dubuque’s Sundown Mountain Resort is busiest when there’s cold weather and snow. Sundown General Manager Mark Gordon told KCRG he’s spraying a lot of artificial snow in preparation for a forecast that calls for warmer-than-normal temperatures. “We’ve got a lot of pass members that expect to be able to come out and ski,” Gordon said. “And whether it’s prime conditions or a little less, we stay open as much as we humanly can in a safe manner.”

Cold weather in mid-November allowed Sundown to make a majority of their snow, leading to one of their earliest openings in the mountain resort’s history. According to KCRG’s records, Dubuque typically sees 14.6 inches of snow between the months of November and December. In 2018, Dubuque only saw 6.3 inches.