You are here: Home / News / No easy path for governor’s idea for access to birth control pills 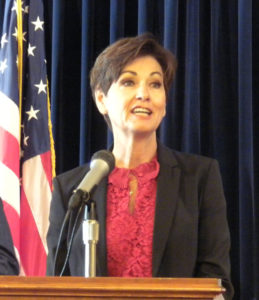 During the late stages of the 2018 campaign, Republican Governor Kim Reynolds proposed letting Iowa women buy “the pill” without a prescription. She plans to press the 2019 legislature to pass a bill that would make birth control pills available in Iowa without a doctor’s prescription.

“This is another opportunity for us to have bipartisan support in something that makes sense,” Reynolds said yesterday.

In 2016, Democrats in the Iowa Senate passed a bill to make this the policy in Iowa, but Republicans in the House tabled the proposal. Republican House Speaker Linda Upmeyer of Clear Lake said not all birth control pills are alike and legislators will have to seek input from the medical community.

“There are reasons that a physician would prescribe one over another,” Upmeyer said during an interview with Radio Iowa. “If someone has a predisposition to breast cancer, you want to make sure you’re paying attention to your estrogen levels…Maybe there is one that is incredibly safe that people could agree to put on the shelf. I don’t think we’re opposed to that, but I do think we want to make sure it’s safe for Iowans to have that access.”

Democrats strongly criticized Reynolds for signing a bill last May to ban nearly all abortions and Senate Democratic Leader Janet Petersen of Des Moines said they are skeptical of this proposal, too.

“Iowa is in a really sad state as far as women’s health care goes,” Petersen told Radio Iowa. “It’s getting harder and harder for women to find places and providers to get family planning services.”

The outline Governor Reynolds sketched during the campaign called for keeping birth control pills behind the pharmacy counter, but letting women buy them without a prescription. Her proposal did not cover other birth control options.