You are here: Home / News / King says entire border wall should be concrete 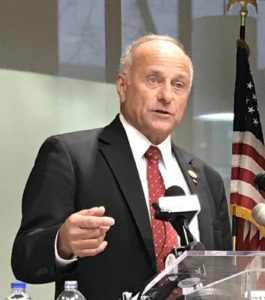 Iowa Congressman Steve King tweeted this morning that if President Trump declares a state of emergency for border security, Trump should “build the whole wall out of concrete.” King said a concrete wall along the US/Mexico border would “stand forever as a monument to the Rule of Law.”

King went on the house floor early in his congressional career with his own model for a “fence and a wall” along the southern border. King’s model called for “precast concrete panels 10 feet wide and 13 feet high.”

Two Republicans have announced this week they intend to challenge King in a Republican Primary if King runs again in 2020. Also this week, King has been rebuked by House GOP leaders for comments he made to The New York Times about “white supremacy, white nationalism and Western Civilization.” King issued a written statement yesterday afternoon, saying he is “simply a Nationalist.”