You are here: Home / News / King says he made ‘rookie mistake’ in talking to New York Times 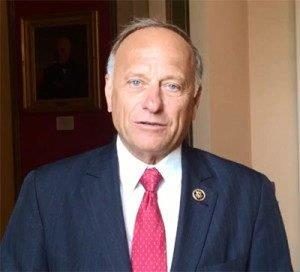 “I regret the heartburn that has poured forth upon this congress and this country and especially in my state and in my congressional district, but the people who know me know I wouldn’t even have to make this statement because they know me,” King said. “They know my life. They know my history.”

King, a former state senator, was first elected to the U.S. House in 2002. King said today that he “made a freshman mistake” in talking to the New York Times.

“Under any fair political definition, I am simply an American nationalist,” King said during his House floor speech.

“The New York Times is suggesting that I’m an advocate for white nationalism and white supremacy. I want to make one thing abundantly clear: I reject those labels and the evil ideology that they define,” King said, reading from a written statement similar to one he issued Thursday. “Further, I condemn anyone that supports this evil and bigoted ideology which saw in its ultimate expression the systematic murder of six million Jewish lives.”

King said he is an advocate for the values of western civilization. The top three Republican in the U.S. House have denounced King in the past 24 hours. Republican Tim Scott, an African American who represents South Carolina in the U.S Senate, said in The Washington Post that “silence is no longer acceptable” when it comes to the things King says.

“The one thing I will not comment on because I cannot and that is I can’t tell you what is in Steve King’s heart,” Kaufmann told reporters this afternoon. “I think everyone deserves to be heard and to have an apology sincerely considered. I mean, that’s what the voters of the 4th district are going to do.”

Kaufmann said he wants to make it clear there are some phrases that do not represent “the American spirit” and Kaufmann puts “white supremacy” in that category.

“You can’t have it both ways and the fact is that the Republican Party has always stood by Steve King,” Price said during tape of  IPTV’s “Iowa Press” program. “This rhetoric, the latest rhetoric, is not anything new from Steve King. We’ve heard this for years and years and years.”

Feenstra, the state senator who’s stepped forward to challenge King, is using the hashtag #retireSteveKing” on twitter and this afternoon Feenstra tweeted a link to a National Review opinion piece titled, “Steve King’s Bigotry Is the Antithesis of American Ideals.”