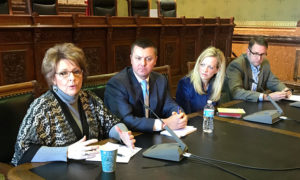 The 2019 Iowa legislative session starts later this morning, with Republicans in control of the debate agenda for the third consecutive year.

Republican Governor Kim Reynolds was just elected to a full, four-year term and Republicans won a majority of seats in the Iowa House and Senate.

Senate Republican Leader Jack Whitver of Ankeny said the GOP accomplished a lot over the past two years and they must keep challenging the “status quo” on a variety of fronts.

“So we’ve got fresh ideas aplenty and I think that’s a great thing for people to take fresh looks at things and bring that energy and innovation into the legislature,” Upmeyer told Radio Iowa, “so I’m excited.”

Todd Prichard of Charles City. the new House Minority Leader, indicated he and other Democrats consider increased state spending on public schools to be the big priority for 2019.

“We’ll be there to remind the legislature and the governor that if we are serious about building a workforce for the future economy, we need to invest in education,” Prichard said at the AP forum, “at all levels.”

“If we continue to see Iowans shoved to the back of the line, putting out-of-state corporations like the MCOs first…we will be loud and fierce in our opposition,” Petersen told reporters at the AP forum.

The House and Senate will begin their day at 10 o’clock. A special committee will be appointed in the House to begin reviewing the challenge of a northeast Iowa legislative race. Democrat Kayla Koether of Decorah is asking that absentee ballots without a postmark that were mailed in time be counted. About a month ago, Republican Representative Michael Bergen of Dorchester was certified the winner in the race – by a nine-vote margin.