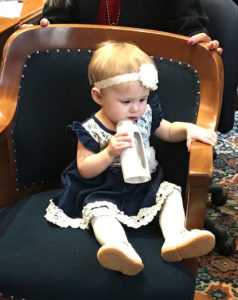 The 2019 legislative session is underway in Des Moines, with the elected leaders of the Iowa General Assembly denouncing the politics of Washington, D.C.

Senate President Charles Schneider, a Republican from West Des Moines, said the state’s elected officials have a responsibility to “bring people together.” “I hope this means that the Iowa Senate can operate without the harsh partisanship that’s infecting our current political discourse,” Schneider said during a speech this morning on the Senate floor. “For too many politicians, politics have become a sport.”

Republican House Speaker Linda Upmeyer of Clear Lake said Republicans made promises to Iowa voters that they intend to keep.

“After the election, no matter who’s in charge, Iowans expect us to move beyond the partisan gamesmanship and govern,” Upmeyer said on the House floor this morning.

“The people of Iowa have entrusted Republicans with a governing majority in this chamber, in the senate and in the governor’s office,” Hagenow said during a late-morning speech on the House floor. “It is our responsibility, therefore, to once again challenge the status quo.”

Senate Majority Leader Jack Whitver, a Republican from Ankeny, said the legislature’s mission should be simple.

House Democratic Leader Todd Prichard of Charles City said the public is tired of “hyper-partisan politics” and G-O-P policies that favor the wealthy and special interests.

“With the election behind us, it is time to set aside petty politics and get to work on improving the lives of all Iowans,” Prichard said late this morning during a speech on the House floor.

Janet Petersen of Des Moines, the leader of Democrats in the Iowa Senate, used her opening day speech to call on Republicans to support a hike in the state’s minimum wage.

“And let’s quit sticking it to Iowa taxpayers to subsidize low-wage employers who don’t pay enough for their employees to have a decent place to live,” she said, “and enough money to feed their families.”

Each of these legislators was formally elected to their leadership positions today shortly after the 2019 session began. Governor Kim Reynolds will deliver the annual “Condition of the State” address to legislators tomorrow morning.