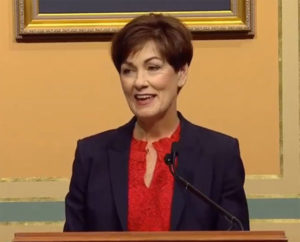 Governor Reynolds gives her Condition of the State speech.

Governor Kim Reynolds says Iowa’s economy “is soaring,” but lawmakers have work to do to ensure struggling Iowans find success, including Iowans with a criminal record.

Reynolds delivered the annual “Condition of the State” address to lawmakers this morning. She asked them to set the wheels in motion so Iowa voters can pass a constitutional amendment so a felon’s voting rights are automatically restored when someone completes their sentence.

Under current practice, felons who’ve done their time and paid their fines must apply to the governor to have their voting rights restored. Making this change is all about second chances, the governor says.

“Talk with someone who, by their own actions, hit rock bottom but decided to turn their life around. Watch their face light up when they tell you about the person who offered them a helping hand. A family member, a friend, or maybe a stranger,” said Reynolds, who has talked publicly about her own second chance after a second OWI arrest and her decision to embrace sobriety. “There are few things as powerful as the joy of someone who got a second chance and found their purpose.”

Reynolds is also touting a new program that will see inmates at the medium-security state prison in Newton learn construction skills by building homes that will be trucked out to rural areas.

Reynolds noted a series of economic highlights, including the state budget surplus and Iowa’s record-low unemployment rate, but she said not everyone feels that success.

“In family rooms, workplaces — and even in this chamber — there are Iowans who are struggling, sometimes in silence,” she said. “Today, I am asking this Legislature to work with me again to fight for those individuals. To make sure that Iowa’s success is every Iowan’s success.”

Reynolds revealed her education spending proposals. She supports a 2.3 percent increase in general state support of public K-12 schools. That amounts to $89 million. The governor wants to an $11 million state spending boost to help sprawling rural districts in particular that have huge transportation costs. She’s asking lawmakers to plug $1 million more into efforts to encourage students to study science, technology, engineering and math.

“In total, that will bring our preK-12 investment to almost $3.4 billion this year,” Reynolds said. “That’s an investment we can be proud of. But Iowans also know that a quality education can’t be reduced to a dollar figure or a percentage increase. It’s about one thing and one thing only: How well we prepare our children to succeed.”

Reynolds then emphasized her “Future Ready Iowa” initiative to encourage Iowans to get a college degree or technical training. Reynolds is asking lawmakers to commit $20 million for new scholarships.

“The time is now to deliver on the promises we’ve made to Iowans looking for a way up,” Reynolds said.

Reynolds is proposing that the state spend more money on mental health services, particularly for kids. And she’s calling for spending more state resources to help boost broadband service and the amount of housing available in rural Iowa.

“I’m announcing the establishment of a Center for Rural Revitalization within the Iowa Economic Development Authority,” Reynolds said. “This center will focus on making rural Iowa an even greater priority and give our Main Streets a roadmap for success.”

Reynolds began her address on a somber note, paying tribute to first responders like the Clinton fire fighter who died last week. She also recognized a veteran who’s head of security at Vermeer in Pella for his “calm and experienced leadership” during the tornado that ripped through the plant in July.

“On the same day a tornado struck Vermeer, separate tornadoes ripped trough Bondurant and Marshalltown…Hundreds of volunteers showed up to help clear debris and rebuild…It’s who we are and why I’m so proud to be your governor,” Reynolds said.

“If we’ve learned anything from the passing of these public servants, it’s this: Working together, with deep resolve, we can achieve more than we ever dreamed possible,” Reynolds said.

Reynolds, who served two years in the state senate before becoming lieutenant governor, told members of the House and senate that bipartisan cooperation is not and should not be an impossible task.