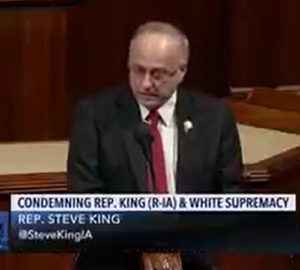 Facing calls for his resignation and a 2020 primary challenge from his fellow Republicans, Iowa Congressman Steve King has voted for a resolution condemning white supremacy and white nationalism — a resolution “of disapproval” drafted in response to comments from King that were published in The New York Times.

“I understand and recognize the gravity of this issue that’s before us,” King said during remarks on the House floor this afternoon.

King again disputed the way his recent comments have been characterized.

“Representative Steve King was quoted as asking: ‘White nationalist, white supremacist, western civilization?’ — There’s a dash in there, a pause — ‘How did that language become offensive?’ I understand how you interpreted my words when you read them this way…but I can tell you this: that ideology never shows up in my head,” King said. “I don’t know how it could possibly come out of my mouth.”

“This body must speak out against this evil,” Clyburn said today on the House floor.

The resolution denouncing white nationalism and white supremacy as “hateful” passed on a vote of 424 to one. The one “no” vote came from a congressman who said he would only support a resolution that directly censures King.

On Monday night, the Republican leader in the House said King’s New York Times quote was “not the first time” King used such language and GOP leaders stripped King of his committee assignments. King last night called that an unprecedented assault on his freedom of speech.

“It’s 13 words, ironically, that’s caused this firestorm,” King said today. “And, again, I regret that we are in this place.”

During his House floor speech, King told his colleagues he “came from a family of abolitionists” who had served in the Union army during the Civil War.

“They paid a price with their lives to make sure all men and now all women are created equal and we’re endowed by our creator with certain unalienable rights and those rights are life, liberty and the pursuit of happiness,” King said. “…I absolutely believe in that and it’s in my heart and it’s in my works.”

Randy Feenstra, the state senator poised to run against King in a Republican primary in 2020, issued a written statement this afternoon, saying since King lost his seat on the House Agriculture Committee, “Iowa farmers are left without a vote on the important committee for the first time in 120 years.”