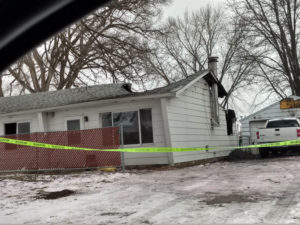 Fire damaged this Evansdale home and left one person dead.

The State Fire Marshal has been called in to investigate a fatal house fire in the Waterloo suburb of Evansdale.

One person died in the fire. Evansdale Fire Chief Ryan Phillips identified the victim as 30-year-old Albert Schmitt, who was living in the home. According to Phillips, Schmitt was unconscious when firefighters pulled him from the burning one-story structure. He died later at a Waterloo hospital.

The fire broke out just before 3:30 AM on Tuesday. When crews arrived, they saw flames shooting from the rear of the home. Part of the roof collapsed. Officials are trying to figure out what sparked the fire. The fire chief says the State Medical Examiner will perform an autopsy to determine the exact cause of Schmitt’s death.