You are here: Home / Agriculture / Grassley finds no progress in trade talks with China 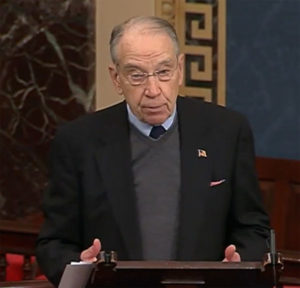 “He (Lighthizer) said that there hasn’t been any progress made in structural changes that need to be made, including intellectual property, stealing trade secrets, and putting pressure on corporations to share information with the Chinese government and industries,” Grassley said.

Three days of trade talks were held last week in Beijiing. Despite the lack of progress, Grassley remains optimistic about resolving the trade war in the near future.

“The Chinese are coming over here in a couple of weeks and there will be more negotiations,” Grassley said. “From my point of view, and the point of view that a lot of people have, the economy of China is suffering and there’s a chance for progress.”

Grassley made his comments in a conference call with ag reporters.