You are here: Home / News / Sioux City looks to make its riverfront a tourist destination 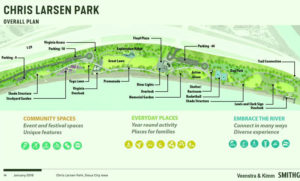 Plans for the Sioux City riverfront.

Sioux City leaders are looking over plans to transform a vacant lot along the city’s riverfront into a tourist destination.

Architect Tom Rogers created a plan that includes a 30-foot tall interactive fountain that would light up at night and change colors. Rogers says he decided against a ferris wheel in the project as Davenport’s riverfront development already has one.

“Making some authentic to Sioux City was something we were really searching for,” Rogers says. “That’s why we came up with the idea of the River Lights and added the detail of doing elements that were about the city itself, so it could be a one-of-a-kind thing that you couldn’t find anywhere else.”

The plan includes green spaces, pavilions, overlooks, a basketball court, a dog park, a playground and a fishing pier platform over Perry Creek. Sioux City’s parks and rec director Matt Salvatore says one of the city’s goals has been to catch the attention of tourists and draw them into the city.

“One way to do that was with something that could be multicolored, LED, lit up at night, just high in stature,” Salvatore says. “Now that’s gonna be accomplished in a different way with a project called River Lights. Multicolored, LED, some high-towered type fixtures, but also an interactive fountain with fog and everything else.” Sioux City Mayor Bob Scott says he’s concerned about a lack of parking and how people will get to the riverfront:

“You’re going to try to attract hundreds of people and you’ve got 67 stalls,” Mayor Scott says. “Where are people going to park? Are we still going to park at the auditorium parking lot and walk across there? Because if you are, that’s a long ways to the activity area.”

The project is still being developed, but the city plans to kick off fundraising for its 14-million-dollar plan in the near future. Sioux City still needs to approve $6.5 million in city funds for the riverfront. The council has tentatively earmarked six-million for the project with organizers raising the rest of the money privately.