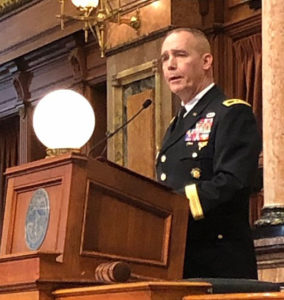 The Iowa National Guard’s leader says his top priority is recruiting soldiers and retaining those already in the guard’s ranks.

“We must broaden the appeal of military service to include people from all across the fabric of our society,” Iowa National Guard Adjutant General Timothy Orr delivered the annual “Condition of the Guard” speech to legislators this morning. “The strength of our Republic depends on willing individuals from every corner of our state, every social, economic and demographic group, and every ethnic background, to step forward and serve alongside their fellow citizens.”

According to data from the Pentagon, fewer than 0.5 percent of the U.S. population is serving in the military.

“With only three of ten 17-to-24 year olds eligible for military service, there’s concern among military and civilian leaders alike about the readiness of our military forces to defend this nation in the years to come,” Orr said. “In order to sustain a strong democracy and ensure the safety and security of our citizens both at home and abroad, we must encourage young Americans to consider military service as a viable and honorable option.”

Orr believes military service should be attractive to young adults as surveys show living a life of meaning is critically important to the generation known as Centennials.

“The profession of arms is one of service before self,” Orr said.

About 300 Iowa National Guard and Air Guard soldiers are overseas on active duty today. Orr said the Guard currently faces among the most complex and demanding challenges he’s seen in his 40 year career.

Orr used his annual address to lawmakers to single out a few soldiers for recognition, including a full-time IT specialist who’s using the Guard’s educational benefits to get a college degree. About 1200 other Iowans who’ve enlisted in the Iowa Guard are using that same benefit at Iowa colleges, universities and community colleges.