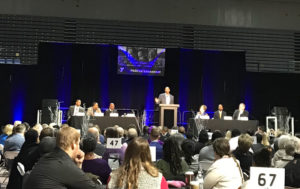 Observances are being held around the state to mark the Martin Luther King, Jr. holiday. More than a thousand gathered for a prayer breakfast early this morning in Des Moines.

“Even with a national holiday, monuments, streets named in his honor, most of us generally don’t think of Dr. King until this time of the year,” said Adam Wright, president and CEO of MidAmerican Energy.

Wright challenged the crowd to re-engage with a sense of purpose.

“We live in the land of the free and the home of the brave, but true freedom and bravery is not living as we please, but as we should and that is what today is about: living as we should, in unity, serving and loving one another,” he said. 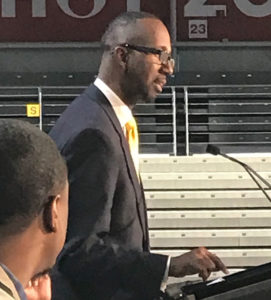 “Sometimes we take our identity from the way people see us and the life they speak into us,” Brown said. “…The Bible says that life and death is in the power of the tongue. You’re either building up or you’re tearing down.”

“Turn down the volume on voices around us that seek to deepen divisions in our own community, sometimes for their own personal gain or power,” Housholder prayed. “Amplify the voices of those faithful and humble souls who bring greater harmony and good to our neighborhoods, schools, workplaces and houses of worship through their love for all.”

The event was held on the Drake University campus and Sue Mattison, the university’s provost, mentioned the recent “robocalls” into the campus from a white supremacist group.

“Drake is certainly not immune to the emboldened haters and the pain that’s in our world, but what I know for a fact, and what the Rev. Dr. King told us, is that time is on the side of change,” Mattison said.

The event was a fundraiser for a YMCA located near the campus. Leisha Barcus is the CEO of the YMCA of Greater Des Moines which operates eight “Y” facilities in the metro as well as the “Y” camp near Boone.

“Last week, the United States House Reublicans formally stripped our Iowa Representative Steve King of all committee assignments after he drew criticism for yet another controversial and racially-charged comment,” she said, to applause from the crowd. “…If Dr. King could look around the country and our beloved state of Iowa today, he would say that our bank of justice has insufficient funds.”

Governor Kim Reynolds, a Republican, and Congresswoman Cindy Axne of West Des Moines, a Democrat, attended the breakfast, but did not speak to the crowd.