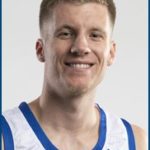 Drake senior Brady Ellingson has been named both the Missouri Valley Conference Men’s Basketball Player and Newcomer of the Week.

The graduate-transfer is the second Bulldog to sweep the league’s weekly honors this season and one of just 19 players in league history to accomplish the feat.

Ellingson led the Bulldogs to a pair of conference wins last week over Bradley and Missouri State with 40 total points on torrid shooting. He shot 14-of-19 (.737) from the field and 12-of-17 (.706) from the three-point arc in those wins.

Against Missouri State, matched a career-high with 25 points by shooting 9-of-10 from the field and a staggering 7-of-8 from the three-point arc. His seven three-pointers tied for the seventh most in a game in school history and he made his first seven shots of the game including a 5-of-5 start from the three-point arc to finish the first half with 17 points. He also added three assists in the win.

In the 17-point road win at Bradley he scored 15 points on 5-of-9 shooting from the three-point arc.