You are here: Home / News / New York Senator Gillibrand says she knows what it takes to win in Iowa 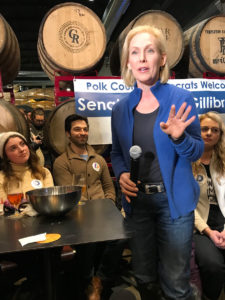 New York Senator Kirsten Gillibrand made a two-day trek through Iowa this weekend. suggesting the Democratic Party must fight to fix a “rigged” political system and regain voters’ trust on issues like trade.

“I am running for president because I will fight for your kids as hard as I fight for my own,” Gillibrand said.

Gillibrand’s career in elected office began in 2006 when she defeated a Republican congressman from upstate New York. Gillibrand told Iowa crowds her pollster joked there were “more cows than Democrats” in the district.

“I kind of recognize you because you are hearty and you are hard-working and you don’t give up. It’s a lot like upstate New York Democrats. We don’t mind the cold either,” Gillibrand said Saturday evening as the temperature outside dipped to single digits. “We’ve have a lot of small cities. We have a lot of small towns. We’ve got a lot of rural areas, too, so I know a bit of what it takes to win in places like this.”

Gillibrand embraced the “Medicare for All” concept a dozen years ago, in her first campaign. Since her appointment to the U.S. Senate in 2009, Gillibrand has evolved on gun policy — moving from an “A” rating from the NRA in 2007 to her “F” rating today. During a speech to a crowd packed inside a Des Moines brewery, Gillibrand linked the NRA with her pledge to “get money out of politics.”

Gillibrand got more applause with a promise to refuse campaign contributions from corporate lobbyists and “corporate PACs.”

Gillibrand started her trek through Iowa with events Friday in Sioux City, followed by Saturday stops in Boone, Ames and Des Moines.