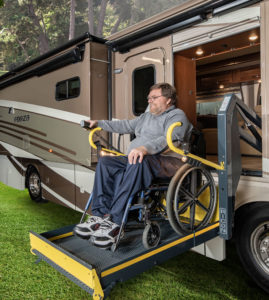 Winnebago vice president for specialty vehicles Ashis Bhattacharya says the company has been modifying RVs through special orders for decades, but there’s enough demand to start a standard line of accessible vehicles.

“There are close to four-million people in wheelchairs and there are another 11-and-a-half million people with some mobility impairment, like they would use a walker or crutches or something like that,” Bhattacharya says. “We feel that this is a market that could be better served with a set of standard products, so we’ve decided to launch this platform.”

Bhattacharya says the company wanted to make sure it was offering the right products for those who have limited mobility. “We want to raise it and give it more visibility and tell anyone who is in a wheelchair that you can be part of the RV lifestyle as well,” he says. “You can have adventures, and whether you’re going to the Grand Canyon or just going to your neighborhood library, Winnebago has an offering for you which will help you get the freedom and the mobility that you’re looking for.”

Bhattacharya says the wheelchair lifts are robustly constructed with accessibility and safety in mind. “They have a capacity of 800 pounds,” he says. “They are flush with the wall of the RV so they don’t protrude out and we’ve put a safety rolling shutter in front of them so that the wheelchair lift doesn’t expose the interior of the RV to the elements and there’s no security issue as well.”

Bhattacharya says the company has gotten input from customers on the design of the interior of the vehicles to make things more accessible, such as larger passageways and moving controls down to a typical wheelchair level. “The beds, for example, are electric beds, where the top half of the bed can actually move up and down because sometimes people need to rest in specific positions,” he says. “We’ve provided tables with overhangs where a wheelchair can go right up to the table, so whether you are sharing a meal with family and friends or working on your computer, you’re able to be at the table with everyone else.”

The new models made their debut at the 2019 Florida RV Supershow in Tampa last week and should be available for dealers to sell later this year.