You are here: Home / News / $350,000 raised for Computer Science Is Elementary grants 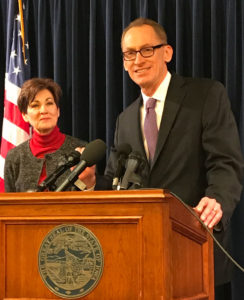 Six Iowa schools in “high-poverty” districts will each get $50,000 state grants this summer for programs to boost the computer skills of elementary students. The application period for these “Computer Science Is Elementary” grants opened yesterday.

Governor Kim Reynolds said the IT professionals of tomorrow are sitting in classrooms across the state today, so it’s critical kids learn computer science in the early grades.

“We want all of our students to have the opportunities and we want them to start as soon as they can because we know that’s critical for how they adapt later on,” Reynolds said during her weekly news conference.

Gary Scholten, executive vice president and chief digital and information officer for Principal Financial, said there’s already a shortage of workers with IT skills and it’s projected to get worse in the coming years.

“One of the unfortunate facts is most of the positions right now in technology are filled by males who are either of European ancestry or Asian ancestry and so we need to get more young women pursuing jobs in technology and so this will help with that, also those with Latino and African American backgrounds as well,” Scholten said, “and so by hitting high-poverty schools, there’s a better chance of doing that.”

Scholten was in charge of raising $350,000 from Iowa businesses to finance the grants. A seventh grant — also worth $50,000 — will be given to the Loess Hills Computer Programming School in Sioux City. Educators there will serve as consultants and the Loess Hills computer science curriculum will be used as a prototype for other schools. Reynolds visited the Sioux City program a couple of years ago.

“I’m telling you, this was a game-changer. I could not believe what I witnessed there,” Reynolds said. “These students were so engaged in what they were doing there and they have kind of a transient population, kids moving in and out, and I can remember the teachers saying how this really helped those kids get up to speed by having the technology and infusing that in all the other disciplines.”

The six other “Computer Science Is Elementary” grants will be awarded on a regional basis. Any Iowa school with at least 40 percent of its students qualified for the government’s free or reduced price lunch program is eligible to apply for a $50,000 award.