You are here: Home / News / 21-year-old from Wayland is now the youngest member of Iowa House

A southeast Iowan is the youngest state legislator to take office in decades.

Twenty-one-year-old Joe Mitchell of Wayland took the oath of office last week and now represents district 84 in the Iowa House. Mitchell graduated from Drake in December with a degree in business administration.

“I graduated a semester early in order to serve up here in the legislature,” he told Radio Iowa.

That means Mitchell was a college student when he ran against and defeated three other competitors in the June 2018 primary. And Mitchell took his final college exams more than a month after he won the November election.

“Having a college experience, but also going out and knocking on doors and going to forums and different events and stuff like that,” Mitchell said during an interview with Radio Iowa, “but it was rewarding and I’m glad I did it.” 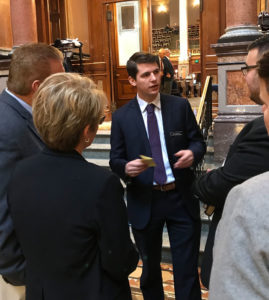 Mitchell speaking to visitors at the State Capitol.

Mitchell replaced 77-year-old State Representative Dave Heaton, a Republican from Mount Pleasant who announced last year that he would not seek reelection. Mitchell said his generation of so-called “Centennials” brings “a fresh, new perspective” to politics.

“People my age, conservatives, and people on the other side alike think a little bit different about a lot of different issues,” Mitchell told Radio Iowa. “…I’m on the Judiciary Committee and so I’m looking forward to working on the criminal justice bill that, hopefully, we’ll be bringing up and maybe helping non-violent drug offenders.”

Mitchell credits his parents with getting him interested in politics.

“Instead of watching the newest family sitcom on ABC, we’d watch the news,” Mitchell said. “I kind of just got interested in issues going on in the political scene and started writing papers about that in high school.”

Mitchell spent the last half of his senior year in high school working as a page in the Iowa House and Mitchell chose Drake for college so he could continue working in the state capitol.  He worked during two legislative sessions as a clerk for a state senator. He’s been an intern in Governor Reynolds’ office and in Senator Ernst’s office and Mitchell did a brief stint working for a lobbying firm — all of this while going to college.

State Representative is now at the top of that resume.

“It’s been a great experience and I’m glad I did it,” Mitchell said. “I wouldn’t trade it for the world.”

Mitchell, however, is not planning to make politics his full-time career. Mitchell is joining his family’s business in Waylon. The company makes braces for babies born with club feet.

“They have about 30 employees there and I plan to go back and work in some kind of management role with my dad,” Mitchell said, “so I’m excited about that, too.”

Mitchell may eventually return to college for a Masters in Business Administration.

“Right now I’m kind of taking a break from school, since I got the undergrad degree, and kind of glad that I don’t have to take any more tests for a while,”  Mitchell said, “but they’ll still be a lot of reading and writing here at the statehouse, obviously.”

Mitchell is part of a group of 22 new House members.

Representative Matt Windschitl of Missouri Valley, a Republican who is the House Speaker Pro-Tempore, was the youngest member of the Iowa House when he was first elected in 2006 at the age of 22. Windschitl turned 23 right before he first took office 12 years ago and he’s passed along the advice he got as a rookie lawmaker.

“Be a sponge and soak up everything that you can. Take in the information so you can make fully-informed decisions for your constituents back home. You don’t have to go out and try and raise the flag in the first day or the first week or the first the first month on any particular issue. Take your time to get your feet underneath you and learn from everybody around you,” Windschitl said, “whether they be a Republican or a Democrat, a representative or a senator.”

The Iowa Constitution requires members of the Iowa House must be at least 21 years of age. Twenty-one-year-old Reid Crawford, a Republican from Ames, was elected to the Iowa House in 1972, but he turned 22 in February of 1973, soon after he took office. Mitchell is about 11 weeks younger than Crawford was in 1973.  Mitchell will turn 22 on April 23, 2019.