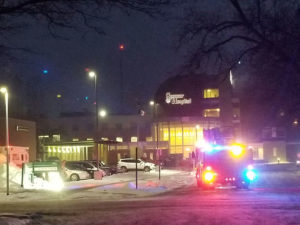 Fire forced the evacuation of the Spencer hospital.

The Spencer Fire Department says the call was received at 5:12 p.m. for a fire in the southwest corner of the hospital. Susan Zulk, the hospital’s vice president of marketing, explains what happened. Zulk says, “In our central sterilization area, which is adjacent to the surgery center, one of our coworkers smelled smoke and noticed sparks coming from a washer and immediately turned to a coworker and pulled the fire alarm.”

She says both workers left the area after the alarm sounded and the automatic fire suppression system extinguished the threat. “The sprinkler system took care of the sparks, however there was some smoke that spread to a few areas of the hospital,” Zulk says. “Because of that, we did transfer some of our inpatients to surrounding facilities.”

A total of 16 patients were transferred to area facilities but the Spencer Hospital president says at no time were patients or hospital employees in danger. Hospital officials anticipate having the surgery center reopen later this week.