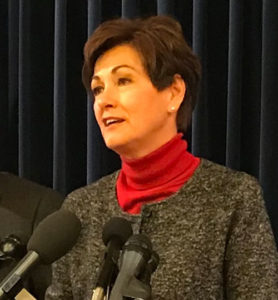 Governor Kim Reynolds has released the details of the constitutional amendment she’s proposing that would automatically restore voting rights to felons who’re no longer imprisoned.

“Any time we’re going to amend the constitution it’s a very serious thing and so we want to make sure that we’re doing it right and that we’re getting the right language in place,” Reynolds said late this morning, “and so I’m going to put forward some language today and that’s a starting point.”

If the legislature endorses her proposal — or something like it — twice over the next four years, it would be presented to voters.

“I have been very upfront about some of the struggles that I have gone through as an individual. I know that you can change when provided second chances and I just believe it’s the right thing to do,” Reynolds said during her weekly news conference.

Democratic Governors Tom Vilsack and Chet Culver used executive orders to automatically restore a felon’s right to vote after they completed their sentences, but Republican Governor Terry Branstad undid that in 2011. Branstad required felons to apply to him to have their voting rights restored.

“I’m the governor now and so this gives me an opportunity to lead on this,” Reynolds said. “It’s important and I look forward to working with the legislature and find some common ground and get this done.”

The amendment Reynolds proposes would give felons the right to vote if they have completed their probation and parole. Some Republicans have expressed reservations, suggesting the proposal should require felons to have paid their court fines and any restitution before they’re allowed to vote. Reynolds said that’s not required in the application process currently in place for felons seeking to have their voting rights restored.

The governor has so far restored the right to vote to 88 Iowans who completed the paperwork — 60 of those were done in October and early November, so those individuals could vote in the 2018 General Election.

Many Democrats in the legislature have expressed support for the governor’s move to pass the constitutional amendment on felon voting rights, but they’ve also called on her to issue an executive order now that would do the same thing. Reynolds said she’s not interested in a temporary solution, but is seeking something that would be permanent.

“Depending on who the governor is, we could switch back and forth and I don’t believe that is the path we should take,” Reynolds said.

A week ago, Reynolds used part of an annual policy speech to legislators to make it clear this issue is a priority for her.