You are here: Home / Weather / Bitter cold on the way after snowfall 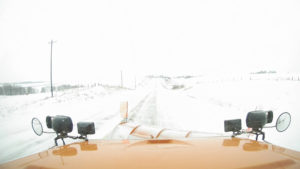 Forecasters say the heavy snow that fell on Iowa in the past 24 hours was only half the story.

Bitter cold will be the second part and it will arrive tomorrow. Meteorologist Brooke Hagenhoff, at the National Weather Service office in Johnston, says the town of Earlham , just west of Des Moines, reports ten inches of snowfall from this latest event, the deepest in the state, so far. “We saw widespread totals of 3-8 inches across a lot of the state,” Hagenhoff says. “As far as what we’re seeing in central Iowa and the Des Moines metro, we’re looking at anywhere from six-to-seven, maybe eight inches.”

Temperatures will fall from here on out, she says, and many Iowa communities will see high temperatures on Thursday in the single digits. “The big thing with all of this is going to be the winds accompanying it,” Hagenhoff says. “We’re looking at sustained winds of 25 to 30 miles per hour with gusts at 35 to maybe 40. Combine that with your cold temperatures and you’re going to have wind chills well below zero.”

The next few days promise to bring Iowa’s coldest weather this season so far, perhaps the coldest in a few years. “Temperatures will be tanking tomorrow during the day,” Hagenhoff says. “By Thursday night, it looks like our coldest wind chills are going to be across northern Iowa, Estherville up towards northeast Iowa in the minus-35, pushing minus-38.”

Those temperatures are becoming quite dangerous, where exposed skin can be frostbitten within a few short minutes, so Iowans need to take precautions. Stay up-to-date with the changing forecast at weather.gov.