You are here: Home / News / Community College enrollment dropped along with unemployment rate 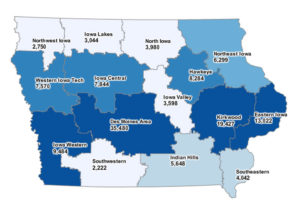 The enrollment in the state’s 15 community colleges dropped slightly in 2018.

Heather Doe of the Iowa Department of Education says the drop of 1,501 students mirrors what happened nationwide.  Doe says it is due in part to a better economy and low unemployment in the state. “That’s been a trend that’s really happened since we peaked back around 2012 –right when there was a great recession going on,” Doe says. “Since we’ve been in recovery, we’ve seen those types of numbers both in Iowa and across the nation.”

Doe says at the peak when the unemployment level was higher, more people were looking to get a degree or learn new skills at community colleges.

She says the increase is due in part to efforts to provide more access to the community college classes. Doe says they’ve been working on a statewide career and technical education redesign that has provided a lot of opportunities for student — particularly in rural areas — to go to regional centers and get access to community college courses they hadn’t had in the past.

The average age of credit students was 21.6 with 80 percent of students under 25 years of age. Females made up 54.3% of total community college credit enrollment. Minority enrollment increased to a record high of 22.4%.

The Education Department’s Division Administrator for Community Colleges, Jeremy Varner, says the programs that provide degrees are not the only thing offered by the schools. “You know hundreds of thousands of Iowans enroll in non-credit offerings each year. And there are a variety of other services that community colleges provide within their communities each year,” Varner says. “So Iowa is fortunate to have a very mature and robust community college system.”

The annual report on community colleges in the state was recently presented to the Iowa Board of Education. You can see the full report here.