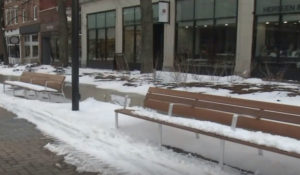 The city council is going to replace some benches on the Ped Mall in Iowa City that have armrests.

The city council in Iowa City has agreed to spend $10,000 to replace 14 benches in the Ped Mall.

The action follows nearly two months of push back from people who’ve complained that the newly installed benches are “hostile” toward the homeless because they have center armrests – preventing people from laying down on the benches.

City councilor Susan Mims voted against the replacement plan, saying she’d prefer the money go directly to families in need, rather than encourage people to sleep outside. “With the prices that were in the staff memo, 10%, roughly $6,000, is rent and utilities for six months for a family of four,” Mims told KCRG TV.  The 14 benches represent 20% of all the new benches.

Council member Mazahir Salih called for replacing half of the new benches with center armrests. “We can’t satisfy everyone, but we try as much as we can to satisfy the public. It think it should be 50-50,” Salih said. “It would cost us around $21,000, which is reasonable.”

In addition to spending $10,000 to replace the 14 benches, city leaders decided to give another $10,000 to Shelter House, a homeless advocacy group.