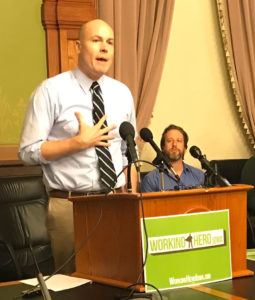 J.D. Scholten, the Democrat who gave Republican Congressman Steve King a surprisingly close race in November, was at the statehouse this morning to launch a new campaign.

“I would like to introduce our new non-profit WorkingHeroIowa.org,” Scholten said.

The group’s aim is to increase the number of low-income Iowans who claim the Earned Income Tax Credit on their state and federal tax returns.

“The people who earn the EITC are all around us. They work. They’re our fellow neighbors. They work in our communities. They work in health care, in education, in agriculture, house keeping, food services and so many more around our strong communities,” Scholten said. “…Most recipients of the EITC are single moms and they use that extra cash to provide for their children’s’ basic needs.”

Scholten said information posted on the Iowa Department of Revenue’s website indicates Iowans are not claiming $140 million dollars worth of these credits that they are owed. The Working Heroes Iowa group will conduct public education seminars so more low income Iowans are aware of the tax credit they may claim — and more tax preparers are on the look-out for their clients who may be eligible.

Scholten told reporters he’s leaving the door to running for elected office again — at some point.

“November of 2020 seems pretty darned far away, to me at least,” Scholten said when asked about his plans. “I’m just trying to get this pushed, going around the state, raising awareness, but I’m leaving things open.”

Scholten said he got the idea for his “Working Heroes Iowa” effort from a California man who runs a similar group — and who endorsed Scholten’s 2018 congressional campaign.