You are here: Home / News / Senator Grassley not sure votes are there to end federal shutdown 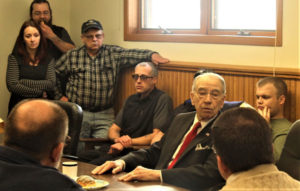 Grassley a Republican was asked about the government shutdown during stop at an Charles City business. He says negotiations between House leaders and the President are the only way to end the 32-day shutdown — but the leader of House Democrats isn’t cooperating.
“Speaker (Nancy) Pelosi hasn’t been willing to sit across the table from the president. Or sit across the table from anybody to negotiate — and particularly when it comes to border security — the number one responsibility of the federal government is to protect the American people,” according to Grassley.

President Donald Trump’s proposal would open the government through September 20th while providing $5.7 billion for a border wall and give temporary deportation protections to one million unauthorized immigrants. It also contains changes to the nation’s asylum rules. He says it’s an attempt by the president to get things moving. Grassley says he doesn’t think the president was inclined to do that, but he says White House Advisors and others convinced the president to bring something forward, as that’s the way the legislative process works.

Grassley says if the 60 votes aren’t there he can’t give a definitive answer on what it would take to open the government. He also commented on trade by saying an agreement with China and the U.S. could potentially come after the countries drop tariffs. He’d like to curb the president’s power on tariffs “It goes along the principle of maybe putting some roadblocks in the thought process before the president makes the decision,” Grassley explains, “plus it would have the authority for the Congress to override the president without passing legislation, but maybe passing a resolution of disapproval.”

Grassley canceled his Thursday and Friday stops to fly back to Washington to vote to end the shutdown.