You are here: Home / News / Bill in Iowa Senate would override city ordinances on fireworks 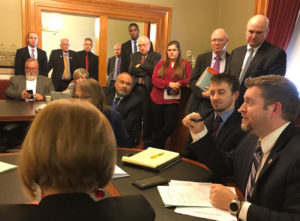 A Senate committee is scheduled to consider a bill next week that will ensure that fireworks may be set off anywhere in the state on Independence Day.

“There is nothing more patriotic in America than fireworks on the 4th of July,” said Senator Jake Chapman, a Republican from Adel who is backing the move to undo city and county ordinances that have restricted or banned fireworks displays on July 4th.

The legislation would also forbid local rules restricting where retailers may sell fireworks. Companies that sell fireworks say that kind of statewide uniformity is essential. Jim Henter of the Iowa Retail Federation suggested during a Senate subcommittee meeting on the proposal that there’s a hodge-podge of regulations now.

“We’ve had folks that had to go through full-blown DCI background checks just to sell them for a couple of weeks, fingerprinting, permits, etc. and that’s just one community,” Henter said . “And we have had other communities that have said: ‘Hey, we’d love to have you in here, love to have you selling.”

Henter also pointed to some ordinances restricting where fireworks may be sold within city limits.

“It is crazy for us to sit here and look at a product that we can legally sell and you have to move it to an industrial zone,” Henter said. “We cannot sell it in our stores.”

Cities and counties as well as fire fighters and law enforcement groups oppose the bill, citing safety concerns. Robert Palmer of the Iowa League of Cities said local ordinances on fireworks should be maintained.

“We’re the best ones at the local level to know where they should be safely used,” he said. “That logic applies on July 4th as well as it does on July 3rd.”

Des Moines Police Chief Dana Wingert said there were 12-hundred 9-1-1 calls in the capital city on Independence Day this past year.

“Most of these calls come into us as ‘shots fired’ trips, which calls for a two-person response, an emergency response,” Wingert said, “and you get there and then you have to make the determination: Was it ‘shots fired’ or was it fireworks? It’s very resource intensive.”

Jonathan Lund, the fire marshal for the City of Des Moines, said first responders see an increase in fires and injuries when fireworks are for sale in the state.

“The injuries and the destruction that’s associated with those, obviously we’re concerned about that,” Lund said.

A senate subcommittee advanced the bill late Thursday afternoon, making it eligible for debate in the Senate Commerce Committee next week.