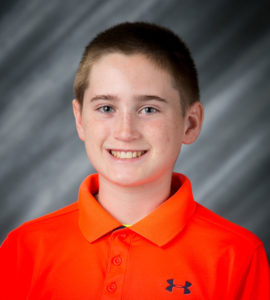 The question in Marshalltown the past 24 hours is — “Where is Corey Brown?” The Marshalltown teen left his home late Tuesday night, apparently after an argument with his parents and hasn’t been seen since.

Marshalltown Police Chief Mike Tupper says the search is continuing, adding every piece of information that can be shared with the police is important. “What we’re asking from the public is to help spread the info we pushed out on social media far and wide. If anyone out there in the community has any thoughts or ideas on where this young man could be, please call us so we can follow up on the information,” Tupper says.

The 13-year old Brown is described as five feet tall, brown hair, weighing 98 pounds. Home security video showed he was wearing a red shirt, black pants, gray tennis shows with a lime green Nike logo, a black and lime green coat and a Seattle Seahawks stocking cap when he left home Tuesday night. Tupper says a search yesterday of the area on the south end of Marshalltown didn’t turn up anything and there is no evidence to show he has been out in the winter weather since leaving home

“We’re hopeful that he is with somebody he knows and maybe he’s just apprehensive about coming home right now. If he’s listening, we want him to know that everybody’s worried about him and it’s okay to come home and everybody just wants to help him,” according to Tupper.

Many folks on social media have asked why an Amber Alert has not been issued. Chief Tupper says this situation does not meet the guidelines for an Amber Alert. There is no vehicle to search for, no license plate number, nor is there any evidence that a crime has been committed or that Corey Brown is in imminent physical danger.