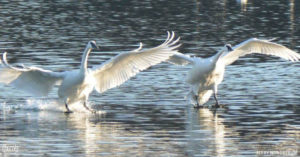 North America’s largest waterfowl species will be celebrated in central Iowa this weekend.

The Trumpeter Swan Soiree is planned for Saturday at Walnut Woods State Park in West Des Moines. Dave Hoffman is the trumpeter swan restoration coordinator for the Iowa Department of Natural Resources. He says you’ll be able to see the swans up close, but he reminds, don’t approach a swan in the wild.

“These are trumpeters and they’re less aggressive, less mean than the mute swans, for example,” Hoffman says. “They are really docile once they’re held and they’re really quite amazing for the kids and for the public program.” Curious onlookers will be able to come right up to the swans and gently touch their feathers. These all-white birds, which have an eight-foot wingspan, are recovering from being wounded.

Trumpeter swans were very common in Iowa around the time the state was being settled, but they vanished over the decades due to excessive hunting.
“They actually disappeared here from Iowa — back in 1893 was the very last birds in the state,” Hoffman says. “In the 1930s, there were only 69 birds remaining in the lower 48 states, only eight pair nesting out in the Yellowstone area, so, extremely rare.”

Conservationists began working to restore the swans in Iowa in the 1990s and today there are about 160 trumpeters just in the Des Moines area.
“We actually just got a tally in last week,” Hoffman says. “The numbers haven’t been finalized yet but I would think it’s close to a thousand trumpeters in the state of Iowa.”

A series of free, family-friendly events are planned at Walnut Woods from 10:30 a.m. until 2 p.m. on Saturday.