You are here: Home / News / Martha Stewart in Iowa ‘to see what’s going on here in farm country’ 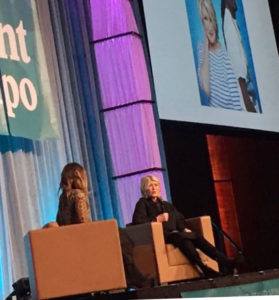 Martha Stewart spoke at an event in Des Moines.

Media mogul Martha Stewart addressed nearly a thousand people over the noon-hour today at a conference in downtown Des Moines.

“I’ve always wanted to come to Iowa,” Stewart said, with a laugh. “I have some ties here. Meredith Corporation is publishing ‘Martha Stewart Living’ and ‘Martha Stewart Wedding’ and our special issues and it was a great opportunity to come and visit…and to see what’s going on here in farm country. ”

Stewart was the keynote speaker at the 12th annual “Land Investment Expo” which draws bankers and farmers for a day-long series of seminars. Stewart described her own 150-acre farm in New York State.

“I do get dirty. I do get out into the garden. I do clean out the chicken coops. I do know how to do all of that stuff, so it’s authentic,” Stewart said. “…When you’re trying to teach people, if you’re not authentic, you’re not a very good teacher.”

Stewart used the phrase “backyard farm” to describe her operation and she listed the wide variety of livestock, poultry, vegetables and fruits produced there.

“Even though I’m just on a little ‘farmette’ I like the idea of farming and growing,” Stewart said.

Most Americans are “really ignorant” about where their food comes from, according to Stewart.

“I think there is room for more exploration and more teaching in that area,” Stewart said. “I think all the fabulous farmers in this room should promote, more, about how it happens.”

Stewart, an advocate of organic food and farming practices, said consumers are growing more concerned about “chemicals and byproducts” in their food. Stewart told the crowd developing more small-scale organic farms is important.

“The big farms, of course, they’re important and they feed the world,” she said, “but the small farms, too, should be encouraged and subsidized in some way.”

The third season of Stewart’s television collaboration with rapper Snoop Dogg, a recreational marijuana enthusiast, starts in February. Stewart emphasized that she does not smoke pot on the show, but Stewart said she is investing in research of the potential medical benefits from cannabis in products for pets as well as humans.