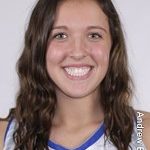 Berg, a 6-0 forward, played in 19 games for the Tigers this season, averaging 3.8 points, 1.7 rebounds and 12.7 minutes per game. She scored a career-high 12 points and grabbed four rebounds in the Tigers’ win over Missouri State.

Berg, a four-time first-team all-state selection, helped Indianola High School qualify for the state tournament all four seasons of her outstanding high school career. She was named the 2018 Iowa Basketball Coaches Association’s Class 5A Player of the Year and graduated as Indianola’s all-time leading scorer with 1,784 career points. Berg, who averaged more than 20.0 points her junior and senior seasons, was a four-time first-team all-conference selection for the Indians. In her four seasons, Indianola complied an 86-12 overall record.

A talented multi-sport athlete, Berg, earned four varsity letters in both cross country and track and field. She qualified for the state meet in both sports each of her final three years. Berg holds Indianola’s cross country 5K record with a time of 19:07 and finished second twice at the Iowa Hawkeye Conference meet. She earned academic all-conference honors in each sport all four years. Her father, Greg, wrestled for UNI while her mother, Michel, played basketball for Coe College.