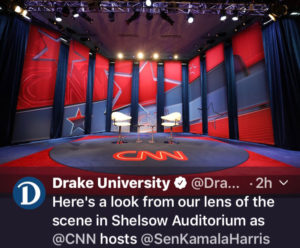 “We have harm that has resulted to farmers, to manufacturers and to consumers,” Harris said tonight on CNN.

Harris kicked off her bid for the White House Sunday. Tonight she was in Iowa for a town hall meeting on CNN. The invited crowd asked most of the questions. Near the end of the forum an Iowa farmer asked Harris for her views on trade.

“We have to support those manufacturers and farmers and consumers of the United States and we can do that in a way that also implements trade policy in collaboration with our allies around the globe,” Harris said.

A few questions centered on race and gender issues. A man in the audience asked Harris for an answer to men who “man-splain” that a woman can’t beat Trump. The audience and the candidate laughed, then Harris offered this: “The people who vote, who live in this country are smarter than that. They’re going to make decisions based on who they think is the best leader.”

“There’s a lot of work to do,” Harris said, “and certainly it’s going to start at the top and not fueling the kind of division that we have seen.”

More presidential prospectors are on their way to Iowa this week. The first Iowa stop in Ohio Senator Sherrod Brown’s “Dignity in Work” tour is in Cresco on Thursday. Former Maryland Congressman John Delaney will open campaign offices in Council Bluffs and Sioux City on Wednesday.