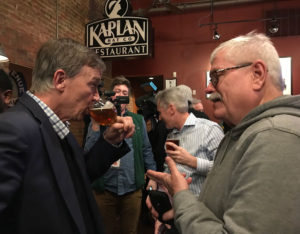 “What I’ve done is achieve progressive goals by getting people together and working together,” Hickenlooper told reporters.

Hickenlooper spoke to about 100 people packed into a West Des Moines home Sunday afternoon, then he stopped by a Des Moines brew pub to talk with patrons like Dave and Karen Wiglin.

“Nice guy. Impressed. I’m going to be anxious to hear a lot more. We’ve got a lot more candidates coming through now,” Dave Wiglin said. “We’re going to be at Kamala’s event.”

That’s the Des Moines “town hall” CNN will broadcast tonight at 9 p.m. featuring California Senator Kamala Harris, who formally entered the 2020 presidential race Sunday. Hickenlooper, the candidate the couple saw last night, got behind the bar and poured a beer for Karen Wiglin.

“In Iowa, all the newcomers to the national stage are going to have to deal with the ‘can they stand up to Trump?’ test,” Dave Wiglin said. “And it means you could be pleasant. You could be wonderful in a setting like this. I’m happy to see it, but we’re going to need somebody they understand what they’re walking into. We want a winner.”

“If you want to beat Trump, I think the way to beat him is not to yell at him and fight with him. That’s playing into his hands,” Hickenlooper told reporters. “I think the way to beat Trump is to show that I can get results and he can’t, right? Division, people yelling and screaming and, you know, dysfunction in Washington at every level. I think most people are sick of it.”

Hickenlooper indicated he hasn’t made a final decision about running for president, but he’s making trips to key states in the nominating process.

“This is one of the great political traditions in the world, right? And in the United States, a candidate who wants to run for the highest office has to go to Iowa, to New Hampshire, to South Carolina and Nevada,” Hickenlooper said. “Four more different states you could never find and yet, between the four of them, I think they represent the heart and soul of this country.”

Hickenlooper started a brew pub in Denver after he was laid off from his job as a geologist. He was in the restaurant business for 16 years and in 1997 he invested in the Raccoon River Brew Pub in Des Moines, which closed in 2015. Hickenlooper was elected mayor of Denver 16 years ago. He just served two terms as Colorado’s governor and left office earlier this month.