You are here: Home / News / Travel conditions not good in many parts of the state 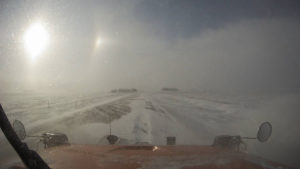 View from DOT plow camera on Hwy 15 in northern Iowa.

Tow bans are in place in more than one dozen counties today  as weather conditions are making travel dangerous in some areas.

Iowa DOT Winter Operations Administrator, Craig Bargfrede, says state plow drivers have some tough conditions to work in. “High wind gusts, low visibility because of the light, fluffy snow that we have received over the last few days. So, that’s causing issues for us today as we try to keep the pavements in near-normal driving condition this time of year,” Bargfrede says.

High winds sometimes blow roadways shut as soon as they are plowed open. “What we’re seeing with the winds going on out there — especially in the open areas — it seems to be a never-ending battle. Especially in trouble spots that are susceptible to the blowing and drifting,”Bargfrede says. “So, our operators are out there monitoring and patrolling those areas and knocking down those drifts and especially focusing on some trouble spot areas.”

The cold weather doesn’t help the fight to keep the roadways safe. “When it get this gold, our materials really are not as effective as we’d like,” according to Bargfrede. “What we are trying to do now is get areas knocked down with the drifts and maybe put down more of a sand-salt mixture.” He says they put that mixture in intersections and ramps on and off the roadways. 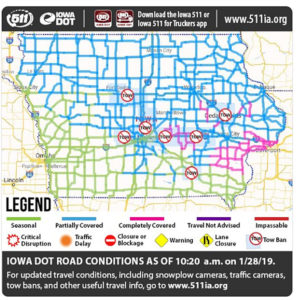 There were a couple of accidents this weekend where drivers ran into the big orange snowplow trucks. Bargfrede says it’s important to remember the trucks are traveling slower and make sudden movements. It’s a good reminder to the traveling public to make sure that you’re slowing down when operating around a snowplow. If you see our blue, white and amber lighting package — that means you are approaching a snowplow from the rear. You will only see that lighting from the rear,” Barfrede says.

He says visibility around the plows can be reduced dramatically. “We create a snow cloud around us naturally by virtue of what we’re doing,” he says, “especially with this light and fluffy snow, it will just increase the visibility issue. So, just please be cautious.”

Bargfrede says the best way to help them is to not go out when conditions are poor. “If you don’t need to make the trip today — stay home where it’s warm,” Bargfrede says. You can find out about travel conditions and tow bans on the DOT’s 511 travel site.