You are here: Home / News / A state senator’s Twitter thread about homelessness in Iowa 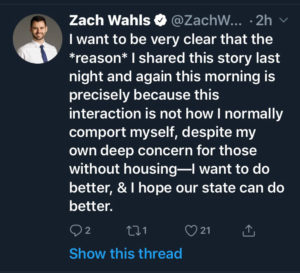 A state senator from Coralville is talking and tweeting about his visit last night with a homeless man on the streets of Des Moines. Senator Zach Wahls gave his first speech on the senate floor today.

“I’m starting to understand now in my third week here that all of us have the power, if we choose, to help people like Rick,” Wahl said. “In fact, the state of Utah — which can sometimes get almost as cold as Iowa — has figured out how to reduce its chronically homeless population by over 90 percent since 2005 and has wound up saving the state money along the way.”

Wahls said he noticed a man walking with a bicycle and a cart on a Des Moines street last (Tuesday) night. Wahls invited the man into a hotel lobby to warm up and discuss where he planned to sleep. The man later got in touch with his step-mother and safely spent the night at her home.

Wahls concluded his senate speech with an appeal for donations to homeless shelters around the state. “What I find especially distressing about the situation — beyond the immediate human and moral cost — is that our veterans, the men and women who have put their lives on the line for our country and for our freedoms, are dramatically over-represented among our homeless population in this state,” Wahls said.