You are here: Home / News / No mail delivery in Iowa today; state government is open 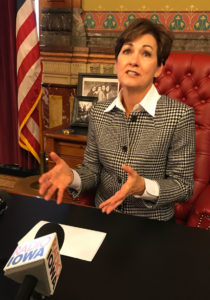 The U.S. Postal Service will not be delivering the mail. Schools, churches and even some Iowa businesses are closed on this frigid Wednesday, but state government is open.

“State agencies within the executive branch of state government will be open to maintain our commitments to Iowans throughout the state,” Governor Kim Reynolds said Tuesday afternoon.

There was very similar weather in 2014, she said, and state government did not close then either.

“In a couple of days, it’s going to be 40, so we just need to be conscientious of the weather,” Reynolds said, with a laugh.

Reynolds spoke with reporters yesterday afternoon in her statehouse office and read through a list tips for surviving when the “feels like” temperatures reach minus 40, minus 50 or even more frigid depths.

“Stay indoors when possible. Dress warmly in loose-fitting, layered, light-weight clothing. Keep dry. Change wet clothing frequently, to prevent loss of body heat. Maintain at least half a tank of gas at all times and keep an emergency supply kit in your car,” Reynolds said.

The governor’s schedule calls for her to be on the road today, visiting businesses in four eastern Iowa cities.

“We’re Iowans and this is part of the elements that we deal with and so just be mindful that it’s nasty outside,” Reynolds said. “…I think if people are just thoughtful about when they go out into the elements, they’ll be fine.”

Reynolds plans to be in Albion by 9 a.m, followed by mid-day tours of companies in Cedar Falls and Cedar Rapids, plus a late afternoon stop in Tipton.

Ames Police tweeted during Tuesday night’s commute that visibility due to blowing snow “deteriorated to just several feet in places.” The tweet ended with this from police: “Get home safe and stay home.”

The National Weather Service has indicated some wind chill records dating back to 1950 in Mason City and 1960 in Waterloo may be broken during this cold snap.