You are here: Home / Crime / Courts / Cats rescued from dumpster in Council Bluffs

Cats found in the dumpster.

A good Samaritan is credited with saving a mother cat and her litter of six kittens from certain death.

Deann Nelson, spokeswoman for the Midlands Humane Society in Council Bluffs, says they got the call Wednesday as temperatures were plummeting. “Someone had found a box of kittens in a dumpster at an apartment complex,” Nelson says. “We went down and picked them up. It turned out to be a mom and kittens, taped up in a box.”

All seven cats are in decent shape now and Nelson says they were obviously pets.  “They were in good weight and they looked pretty good,” Nelson says. “Actually, they were socialized and in good health so they had been somebody’s cats.” With all of the resources available, Nelson is still appalled by this type of animal cruelty, as the cats wouldn’t have survived long. 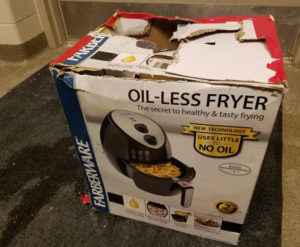 This is the box the cats were in.

“There’s so many other avenues that people can take,” Nelson says. “You don’t have to do that. There’s rescues and shelters and even just good Samaritans who will bring them in for you. There’s no excuse.” She’s confident the cats will all be adopted soon.

The person responsible for taping the animals into the box and dumping it at the Chapel Ridge Apartments has not been found.