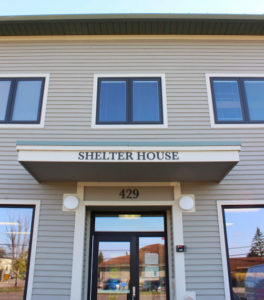 John DeTaeye works for Humility Homes and Services in Davenport and was very concerned about people who might have to walk from that 70-bed shelter to the Kings Harvest Emergency Overflow Shelter several blocks away.  “We were really worried about how we were going to get people from our shelter to Kings Harvest,” DeTaeye says. “We’re putting our staff at risk being out in the cold. There’s all kinds of HUD guidelines about transporting people in your own vehicles, so we were sort of stuck.”

Fortunately, two other agencies — River Bend Transit and Scott County Community Services — offered to give people rides for free. In Cedar Rapids, a shelter that’s usually only open at night is offering people a warm respite all day during the record-breaking cold.

Phoebe Trepp is executive director of Willis Dady Homeless Services, which is temporarily open round-the-clock. “With this cold snap, we know that people shouldn’t be out for much longer than a couple of minutes,” Trepp says. “The vast majority of our clients don’t have cars and certainly not being able to park in garages and things like that. So we’ve decided to extend our hours to just stay open.” Transportation is available from the shelter directly to the Cedar Rapids library, which is extending its hours as well.

The Shelter House, with two locations in Iowa City, is also open around-the-clock for the duration of the bitter cold spell. Angelica Vannatta is that organization’s development director. “We made arrangements with our staff and volunteers to make sure that we could have both of those facilities open 24/7,” Vannatta says. “It is for anyone who needs warmth, shelter and a place to sleep. So, we don’t ask questions, we just have the space available for them.”

The Iowa City Public Library will also be open for extra hours. Forecasters say high temperatures should climb into the 30s statewide on Friday, the 40s on Saturday and perhaps some 50s by Sunday.