You are here: Home / News / Ohio Senator, likely to run for president, in Iowa for 7-city tour 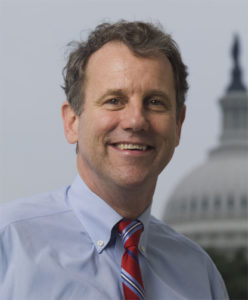 Brown is embarking on what he’s calling the “Dignity of Work” tour and it includes a seven-city swing through Iowa that begins tonight in Cresco. The political challenges for Democrats in his home state of Ohio are similar to those Iowa, according to Brown, who won re-election to his Ohio senate seat in 2018.

Brown suggests Democrats will rebound in 2020 with a message that addresses the stagnant wages for American workers at a time when corporations are making profits. Brown would repeal the Trump-era tax cuts.

“Seventy percent of the benefits go to the richest one percent,” Brown said of the tax plan that cleared the Republican-led congress in December, 2017. “Then I think you write a tax bill including ‘The Patriot Corporation Act’ which says if companies pay decent wages and provide health and pension benefits and do their production in the United States, they get a lower tax rate.”

Brown also supports what he calls a “Corporate Freeloader Fee.”

“Big companies with CEOs that are making millions of dollars, companies that pay such low wages that those workers end up on Medicaid and food stamps and Section 8 housing vouchers and Earned Income Tax Credits,” Brown said during the Radio Iowa interview. “….There’s no reason taxpayers should subsidize these companies’ employees.”

Brown also supports the “Medicare for All” concept, with what he called a “Medicare Look Alike Plan” as an option, not a mandate.

“I want people to have choices. I want people to have insurance,” Brown told Radio Iowa “…We build on the Affordable Care Act. We fix the pre-existing condition consumer protection…We expand Medicare voluntarily to 50, so people between 50 and 64 can do an early buy-in to Medicare. We provide the public option so people in private insurance can decide, if they’d like, to join a public option.”

Brown will attend a “Tri-County Dems” meeting tonight in Cresco. He’ll be in Mason City, Clear Lake, Perry and Waterloo on Friday. Brown plans to be in Dubuque and Clinton on Saturday.