You are here: Home / News / Delaney says Democrats must choose centrist, or Starbucks CEO will ‘waltz in’ to White House 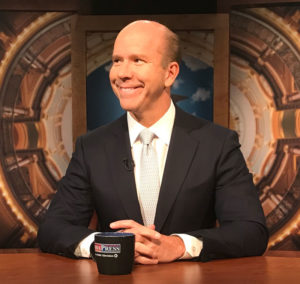 John Delaney, the Democrat who jumped into the presidential race 18 months ago, today said the way to resolve the impasse over border security is for congressional leaders and the president to simply agree on how much to spend.

“Let’s say it’s $5 billion,” Delaney said during taping of IPTV’s “Iowa Press” program. “And then we should have experts who actually know what they’re talking about around border security, and I don’t consider the president to be one of those people, come back with recommendations as to what we should do.”

Delaney is a three-term Maryland congressman who did not seek reelection to the U.S. House in 2018. Delaney is distancing himself from House Speaker Nancy Pelosi’s assertion that a wall along the border is immoral.

“The notion of the president building a monument to himself from sea to shining sea, I think that is immoral,” Delaney said when asked about Pelosi’s statement. “I think building barriers as part of a comprehensive, smart security strategy, then those aren’t immoral.”

Delaney argued the most effective and cost-efficient way to enhance border security is a combination of hiring more border agents, deploying drones or other devices to monitor border crossings and erecting some new barriers at different points.

Delaney said it’s important for the U.S. to be welcoming to immigrants and he’d resist GOP plans to lower the number of legal immigrants allowed into the country.

“If you go around the world and you look at countries that have shrinking populations because they don’t let immigrants in, it’s a terrible economic picture for them,” Delaney said, “so we have to get back to this notion that immigrants are incredibly valuable to our country, particularly economically.”

Delaney, the grandson of immigrants, said the word “centrist” best describes his political views. The Democratic Party would do best, he said, by choosing a moderate nominee for president, especially if Starbucks CEO Howard Schultz runs as an independent.

“So Howard Schultz is sitting back and saying: ‘The Democrats are going to put up someone so far left that they are unappealing to the center of the country and I’m going to waltz in as the centrist — right? –and get all those voters,'” Delaney said. “So my point to Democrats is: ‘Why are we ceding the center?'”

Independents are the fastest-growing segment of the voting population and Delaney said it’s important that Democrats nominate a candidate who can appeal to progressives, moderates, independents and Republicans.

“That is fundamentally what my campaign is about,” Delaney said, “because if we want to beat (President) Trump and win all these elections, we can’t cede the center and let someone like Howard Schultz waltz in because we’ve put up a candidate that is unappealing to the largest part of the American people.”