You are here: Home / News / Warm weekend temperatures not expected to cause flooding concerns 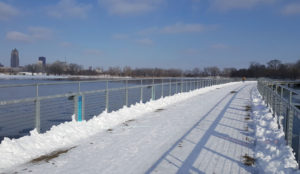 Iowa is expected to go from the deep freeze to abnormally warm temperatures this weekend — but an expert doesn’t expect that to create a lot of flooding problems from melting snow.

National Weather Service hydrologist Jeff Zogg keeps track of the runoff from the warm up. “That’ll mainly produce some within bank rises on most streams. There is a possibility of maybe getting a little bit higher some streams maybe in southern Iowa, and also in eastern Iowa,” Zogg says.

Zogg says they have a formula for determining the flooding possibility. “We look at various factors — we look at the rate of the snow melt, how fast the snow is expected to melt, any precipitation, how much snow we are actually expecting to melt, as well as how much water is the streams when the snowmelt occurs,” according to Zogg.

He says with temperatures forecast to reach 50 by Sunday, it speeds up the process and the melting is more rapid than what would typically happen as temperatures start to warm up in a thaw.