You are here: Home / News / 50-fold increase proposed in fine for taking a bald eagle in Iowa 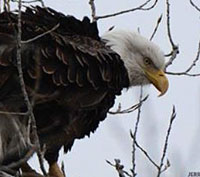 A bill that would dramatically raise the fine for killing a bald eagle in Iowa has again soared past an initial hearing in the House.

Backers say last year’s attempt to raise the state fine from $50 to $2,500 failed due to timing, not from lack of support. Kay Neumann of Saving Our Avian Resources — which stands for SOAR — said in January her non-profit received an eagle that was shot in Dallas County.

“It destroyed a wing. We had to euthanize that bird,” Neumann said during a House subcommittee meeting today. “…This would be a wonderful deterrent.”

About eight percent of the eagles admitted to the Carroll County facility Newmann works in have been shot. Neumann said raising the state fine for shooting at an eagle should have been raised long ago.

“We need to have some protection for eagles in the state of Iowa,” Neumann said, “and we need to give this to our conservation officers so that they can have a better opportunity to prevent this from happening.”

Dale Garner, a top administrator in the Iowa Department of Natural Resources, said it’s difficult to imagine someone accidentally shooting a bald eagle.

“There’s not many birds that have a pure white head and a black body,” Garner said, “so it’s hard to mistake them.”

The number of eagles in Iowa swells from about 500 to 3,000 in the winter. Officials say about 40 eagles have been illegally killed in Iowa over the past four years and all cases were forwarded to the feds. That’s because the federal penalty for capturing, killing or destroying an eagle is $2,500.

The bill to raise the state fine to $2,500 is now eligible for debate in the House Natural Resources Committee

The bald eagle became a federally-protected species in 1940. The Continental Congress chose the bald eagle as the national emblem in 1782.