You are here: Home / News / January temperatures end up around normal after late polar plunge 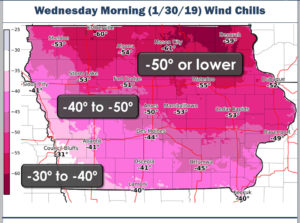 January saw highs in the 60s go to 60 below windchill.

Iowans are used to wild weather extremes in the wintertime but going from balmy highs in the 60s to wind chills of 60 below in the course of several days is radical, even for the Hawkeye State.

State climatologist Justin Glisan says the month of January started out quite warm and stayed that way almost  through the end. “Up until the 27th of January, the state was above average temperature-wise,” Glisan says, “and then we got that polar plunge the last few days that really tipped the averages.”

It was almost like somebody roused a dozing Mother Nature from her slumber last Sunday and reminded her it’s supposed to be winter in Iowa — and she overreacted a bit.  “You look at the first week of January, we were actually way above average, between 15 to 25 degrees above average. Some parts of the state had temperatures in the 50s and 60s,” Glisan says. “You flip that, the last week of the month, we’re getting temperatures down into negative 30 and negative 40.” Overall, the statewide average temperature for January was 18.5 degrees, about one degree below normal.

Glisan says it appears February will remain colder than normal. “We’re looking to trend below-average for the month,” Glisan says. “We’re getting into the later part of wintertime so we’re warming up, but as of now, the outlooks have below-average temperatures. As for precipitation, it looks like we’re a tad bit above average for rainfall/snowfall across the state.”

Precipitation for January statewide averaged 1.32 inches, which is four-tenths of an inch above normal. He notes, January is typically the driest month of the year.