You are here: Home / News / Advocates for Alzheimer’s patients lobbying at Iowa Capitol 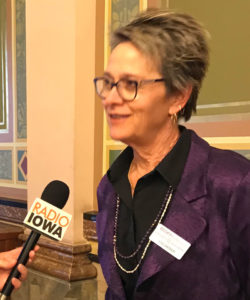 Advocates are asking state legislators to pass a law requiring hospitals to give clear instructions to caregivers at home when Alzheimer’s patients are discharged.

Romie Orr was 72 years old when she was diagnosed with Alzheimer’s.

“I included my children in caring for my mother so that they would understand how I want to be treated because I’m pretty sure I’m getting it,” she said. “You never know. My didn’t have it, so I might have gotten that side, but planning, nonetheless, for the future.”

The Alzheimer’s Association is also asking legislators to set aside $1 million to help low-income Iowans make modifications to their homes, so Alzheimer’s patients can avoid more expensive nursing home care as long as possible. Sandra Robertson of Des Moines is among the crowd lobbying legislators. Her mother was diagnosed with Alzheimer’s at age 48.

“My brother, Jay Allen, is a singer/songwriter in Nashville, Tennessee, and he wrote a song called ‘Blank Stares’ for our mother,” she said. “This last year he toured across the U.S., singing that song at different events and has brought just a huge awareness to what people are dealing with.”

The song begins with a voice mail message.  Listen and watch the video here.

Three weeks ago, Robertson’s mother was transferred to a care facility because the family could no longer care for her at home.

“It’s stressful at times, but we’re adjusting o.k. and we’re very thankful for the opportunity to be here today and be the voice for my dad and for my mother,” Robertson told Radio Iowa.

There are about 64,000 Iowa Alzheimer’s patients in Iowa today.