You are here: Home / News / Governor says settlements put harassment case ‘in the past’ 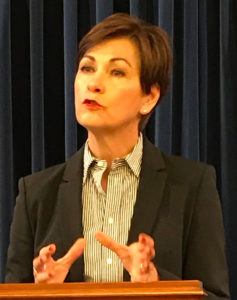 Governor Kim Reynolds is asking Iowa’s attorney general about the state’s options now that two women who accused a state agency director of sexual harassment are being awarded settlements worth more than $4 million.

“We heard from one of the victims that said, ‘I’m ready to move on with my life and put this in the past,'” Reynolds said, “and that’s what this has done.”

Reynolds isn’t ruling out the idea the state may take some sort of legal action against Jamison to try to offset the $4.15 million taxpayers are paying.

“We’re consulting with the AG’s office to consider what our state’s options are once the settlements are finalized,” Reynolds said.

Reynolds has repeatedly said she has “zero tolerance” for sexual harassment in state government and she repeated that message today during her weekly news conference.

“We’re never going to stop doing everything that we can to change the culture and really raise what the expectations are for administrators and employees that come to work here every single day,” Reynolds said.

The state’s solicitor general yesterday said awarding cash settlements to the two women avoids what could be more costly legal action against the state.