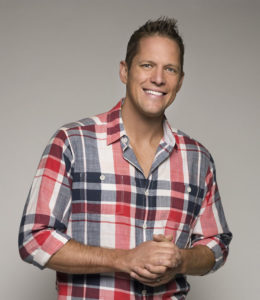 During the dead of winter, many Iowans like to daydream about their summer landscaping plans.

The host of several cable TV backyard makeover shows will be in central Iowa this week to help make those dreams become a reality. Chris Lambton, host of “Going Yard,” “Yard Crashers” and “Lawn and Order,” says one cheap, easy move to improve our yards is to spread mulch every spring.

“I love mulch. It looks great. It smells great. It helps keep down weeds so you won’t be out there weeding every weekend,” Lambton says. “It helps to retain moisture for plants, making them healthier and happier. At the end of the season, it breaks down into a compost so it feeds the plants all year-round. Mulch is the most inexpensive way to get a great return on your investment.”

For a larger project, Lampton suggests building a stone patio as a way to make your backyard more user-friendly. “If you do a stone patio and you lay it down correctly, stone’s not going to rot, you’re not going to have to paint it and it’s going to last forever,” Lambton says. “If you do a stone patio, you can put some chairs out there, put a chimenea there for those cold spring and fall nights, a great seating area. It’s a one-time investment if it’s done correctly.”

Lambton is a professional landscaper who runs his family’s landscaping business with his brother in Cape Cod, Massachusetts. He says one mistake some people make with landscaping is biting off more than they can chew. “A lot of people have these grandiose ideas for backyards and say, ‘I want to do everything at once!’ but they get out there, they rent a machine and then, three hours later, they’re like, ‘Aw, man, what did I get myself into?'” Lambton says. “I always say to start small, create a container garden or get a little vegetable garden going one year, then do a stone patio the next year. Do a little bit at a time to build up your confidence.”

Lambton is one of the guests at the Des Moines Home & Garden Show, which runs Thursday through Sunday at the Iowa Events Center. The event will showcase more than 400 exhibitors. Lambton will be doing 25-minute presentations followed by Q-and-A sessions, during which he encourages people to bring lots of pictures of their backyards.