You are here: Home / News / Ice storm could cause lots of problems in eastern Iowa

Whether it’s by car or on foot, venturing outside in eastern Iowa this afternoon and tonight could be very dangerous due to accumulating sheets of ice.

Meteorologist Zach Uttech, at the National Weather Service in Davenport, says an Ice Storm Warning is in effect for about a dozen Iowa counties, including cities from Keokuk and Burlington to Muscatine, Davenport and Clinton. “Temperatures are very cold right now, we’re in the teens, so we’re expecting treacherous travel as the ice develops,” Uttech says. “We could have ice accumulations anywhere from one-tenth to maybe three-tenths of an inch. Impacts from that, we could be looking at downed tree branches and possibly power outages as well.” 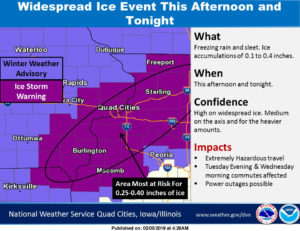 Roads are very slippery, as are driveways, sidewalks and exposed stairways. Those who can stay home should do so, he says, as it may not be safe until Wednesday. “Luckily, we’re looking at some warmer temperatures for tomorrow, especially toward the Quad Cities area,” Uttech says. “We should have highs, hopefully, right at freezing and maybe a few degrees above, so that should help to melt some of the ice. Especially any areas that have salt down, should see some improvements tomorrow.”

It would be wise, he says, to keep a supply of extra food and water on hand, as well as flashlights and batteries in case the power goes out. Ice Storm Warnings are a relatively rare commodity in Iowa, he says, thankfully rare. “Into eastern Iowa, you have to go back to 2013, we had one up by Dubuque,” Uttech says. “You have to go back all of the way to 2010 to include the Cedar Rapids area in that, so, it’s definitely not something that happens every year.”

Keep up with the changing forecast at weather-dot-gov and check road conditions at 511ia.org.