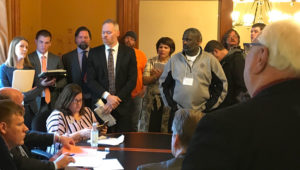 The state’s Workforce Development agency is proposing a six-month delay in paying the first week of unemployment benefits.

Unions are sharply critical of the move, but the plan got initial approval from Republicans on a House subcommittee today.

“I think there are valid concerns on both sides and I just want to see the conversation continue,” Republican Representative Phil Thompson, a contractor from Jefferson, said near the end of today’s meeting.

Workforce Development proposes that the first week of jobless benefits be paid only after an employee uses up his or her yearly allowance of up to 26 weeks of unemployment. Three-quarters of Iowans who file for unemployment never reach that 26-week limit, so they would never get that first week of benefits.

John Lowrey, an apprentice with the Carpenters Union Local 106 (one-oh-six) in Altoona, told lawmakers he lives paycheck-to-paycheck and wouldn’t be able to pay child support if his first week of unemployment benefits is never paid.

“I wish I did have $50,000 in the bank, but I don’t and that’s important to me, that one week,” Lowrey said. “…Through no fault of my own, I’m at the mercy of so many other people…I couldn’t get in to do my job because guess what? The electricians didn’t get their job done or my employer didn’t get the right materials.”

Critics say some construction firms use Iowa’s unemployment system as a “wage subsidy”– workers claim a week of unemployment benefits while they’re off the job-site, undergoing training. Representative Gary Worthan, a Republican from Storm Lake, said that’s a problem.

“When we’ve got an industry that you say is $106 million in the red as far as their contributions to the unemployment fund, that means every other employer in the state outside of the construction trades has to make up that $106 million,” Worthan said.

The State of Iowa issued about $360 million worth of unemployment checks last year. About half of that was paid to employees who were out of work for one to four weeks.