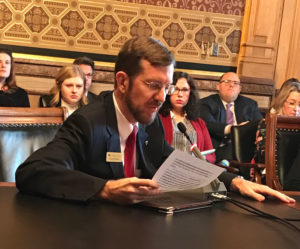 “Iowa has one of the most activist Supreme Courts in the country,” Chuck Hurley, legal counsel for The Family Leader, said this afternoon. “You name it and the Iowa Supreme Court is to the left on almost every issue currently.”

Public hearings were held at the state capitol today on a plan to reshuffle the commission that nominates judges as well as a bid to amend the Iowa Constitution to specify that it does not “secure” the right to an abortion. Isabelle Barrett of Des Moines accused Republicans of pursuing a “crazy ideology.”

“The response to that should not be to politicize the court in order to get decisions that we want,” Crow said.

Representative Sandy Salmon, a Republican from Janesville, said it’s time to give Iowans a “larger voice” in who gets to be a judge.

“Out in rural Iowa, everybody sees that politics is part of the judiciary,” Salmon said during a House subcommittee meeting today. “There’s no getting around it.”

Iowa lawyers currently vote on which lawyers should serve on the Judicial Nominating Commission alongside people selected by the governor. David L. Brown of the Iowa Academy of Trial Lawyers argued against undoing that process, which was set up in 1962.

“If you talk to people who actually are still alive who were here at the time…they’ll tell you how bad it was before they changed to this merit-based system,” Brown said.

Bill Gustoff, a Des Moines attorney who unsuccessfully sought a spot on the commission in 2011, said trial lawyers are choosing the judges they’ll face in court.

“The current system is unelected lawyers, who nobody knows and they don’t account to any voters, basically controlling the system,” Gustoff said.

A bill that instead would have the top four legislative leaders appoint half of the members of the Judicial Nominating Commission cleared House and Senate subcommittees today.

The other abortion-related proposal — a constitutional amendment to block future court rulings upholding abortion rights — advanced out of a Senate subcommittee. Kimberly Laube of Lutheran Family Service said the Iowa Supreme Court has overstepped its authority.

“This amendment became necessary when a handful of unelected members of Iowa’s Supreme Court…chose, in essence, to create law rather than interpret it,” Laube said during a Senate subcommittee hearing.

Jamie Burch Elliott of Planned Parenthood of the Heartland said constitutional amendments usually expand rights rather than take them away.

“At what point can we acknowledge that there are different views on this issue and understand that our own personal views should not infringe on the private medical decisions of others?” she asked.